In October 2021, Brenda Hoyle aged 77, passed away at East Lancashire Hospice having spent a number of weeks being 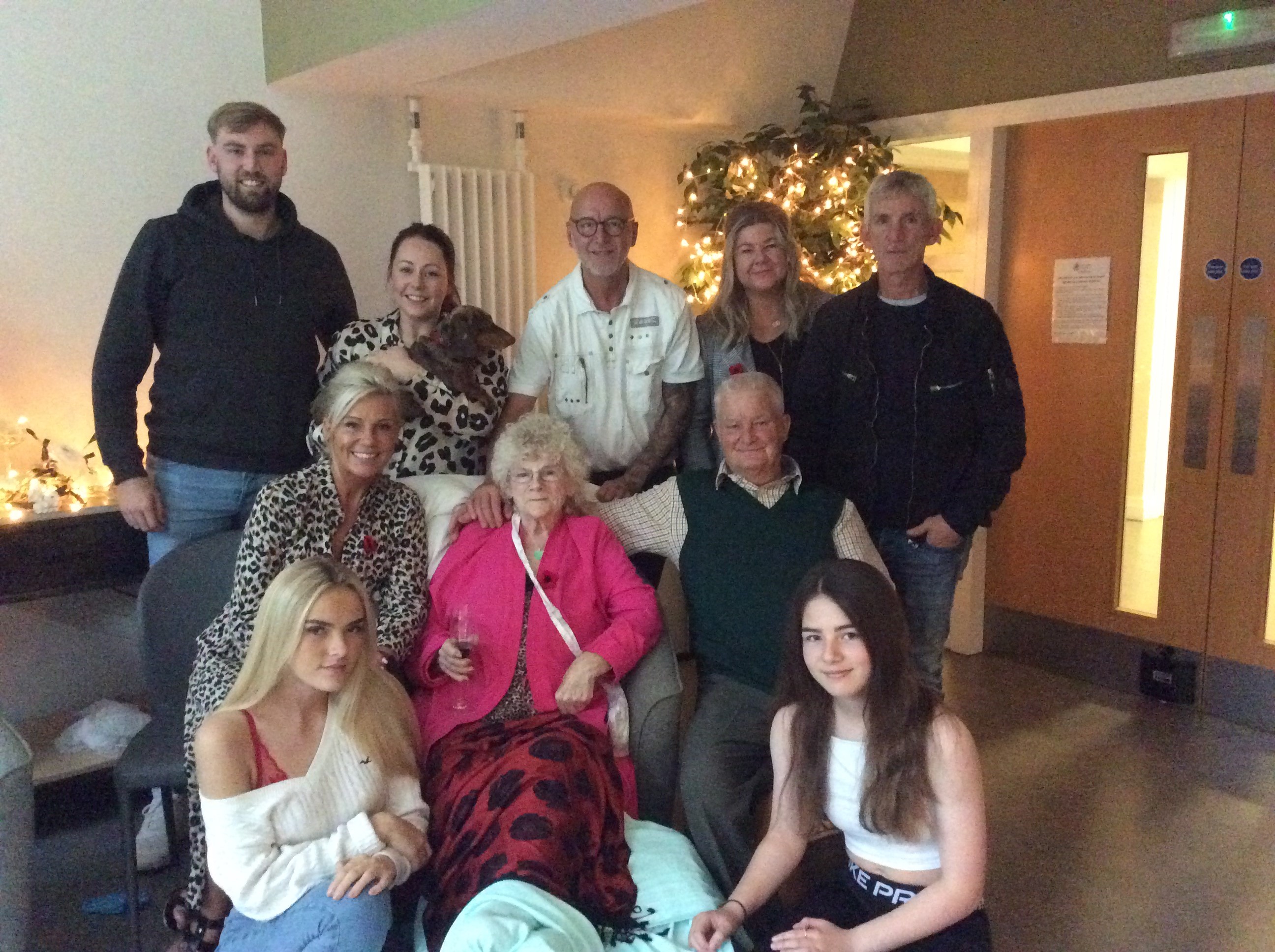 cared for on the Inpatient Unit with a cancer diagnosis.

Brenda was a much loved wife to Sid and Mother to Mark, Shaun and Gillian as well as grandmother to four granddaughters and throughout the time she spent at the hospice, Brenda’s family where by her side.

On the 6th of September just 3 days after Brenda’s birthday, the family received the news they’d all be dreading, but were hoping would never come.  Looking for support, Gillian contacted McMillan Hub at Burnley Hospital who in turn introduced her to the hospice services via the District Nurses where Nurse Elaine a familiar face, having previously nursed Brenda son Sean, immediately put Brenda at ease.

From here, they were introduced to another Elaine, this time in the hospice Community Nurse Specialist Team who they fondly nicknamed ‘Curly Elaine’ due to her ringlets much like Brenda’s own who had also been affectionately called ‘Little Curly Brenda’ throughout her life! Together they all worked to ensure that Brenda had everything she needed to remain at home and supported the family in every way to enable this, supplying the practical things such as a bed and wheelchair, and emotional support, always on hand for advice or a much needed chat.

Gillian recalls how throughout this time she read up on her mums diagnosis and symptoms to ensure she knew what she was dealing with and as she says ‘to protect her mum from feeling she needed to do the same’. Describing her mum as her ‘soulmate’ and her ‘absolute rock’, Gillian explains how she honoured her promise to take care of her mum, just like her mum had taken care of her.

A short while later, on 1st October 2021, Brenda was admitted to the hospice for a medication review and to manage her pain and sickness after all attempts to remain at home became too much for the family to handle alone.

Greeted with open arms and lovely calm surroundings the family immediately felt relief. Gillian describes how initially her mum spent some time in Room 2 which they thought was absolutely lovely, taking the time to stand at the door and have a good look around allowing herself to get the feel for the place before settling in. The room also had direct access to the courtyard, which was full of Ivy, a special sign for the family as Brenda’s mum, to whom they were all extremely close, had been called ‘Ivy’ and this made them feel that she was all around.

Gillian went on to say “Mum felt so comfortable and content and even said to me “I’m glad I’m in here, I feel at peace”. The staff were ‘absolutely amazing’ and talked to Brenda and her family in detail to explain everything and made sure they always understood what was happening at any given moment. This enabled Gillian, who had been by her mother’s side both day and night to take a little respite, comforted by the fact that Brenda was at ease.

When Brenda became anxious, missing her grandchildren, the hospice arranged for them to come and visit encouraging them to fill Brenda’s room with things from home and fairy lights to lift her spirits. When Brenda’s friend came to visit they shared a bottle of their favourite wine in the glow of the lights her family had hung. Missing her garden, Brenda was moved to Room 4 which had doors opening onto the garden allowing her to watch the squirrels as well as a Robin which came every day to visit, during this time she was also able to see her beloved sausage dog, Alfie who regularly popped in for a visit much to the delight of all the staff!

Sid and Brenda had been married for 57 years on the 9th of October and although they were unable to leave the Hospice this didn’t stop them from celebrating in style, the Hospice decorated the lounge area and welcomed the whole family to be together and enjoy a champagne Afternoon Tea courtesy of Café Retreat at East Lancashire Hospice and a walk round the garden complete with Alfie the sausage dog!

Some of Gillian’s fondest memories of the time spent with her mum on the Inpatient Unit were being able to give her a Jacuzzi bath and wrapping her curls up in a leopard print towel (Brenda’s favourite print!) filling the room daily with relaxing music and old favourites.  They also enjoyed face packs together whilst painting mum’s nails, watching Strictly Come Dancing, Brenda never without her beloved poppy shawl draped over her knee.

Working with Liz and the team in CAST (Creative and Support Therapies), Gillian was able to make some beautiful keepsakes of her mum for her and her family including little hearts containing her mums hair and thumbprint as well as little butterflies for each of the grandchildren in recognition of Brenda often being referred to as ‘Brenda Butterfly’.

A few days before Brenda passed, Liz, one of the CAST Team (Creative and Support Therapies) together with the nursing staff, made a wish come true for Brenda and her family by turning on the Christmas lights in the garden a little early to give Brenda the chance to see them, bringing tears to the eyes of all involved.

As the illness progressed, hospice staff were able to put a bed in Brenda’s room so Gillian could be close to her mum until her passing.  She describes how she felt blessed to remain as ever by her Mum’s side and goes on to say “Mum was my soulmate and whilst I know that a part of me has gone with mum, my mum will always be with me”.

Gillian remembers how her Grandma used to sing to her ‘I watched the sunrise’ and how she sang this to her mum after her passing, this special song was also sung by one of Brenda’s friends at her funeral at St Peters Church, Mill Hill.  In recognition of the loving, caring and genuine person Brenda was, her family and friends filled the church to the brim dressed in poppies and Brenda’s favourite prints in tribute to such a wonderful women and the mark she had made on them. Ever present the hospice staff catered for what can only be described as ’the after party’ making sure no one went hungry whilst they danced the night away to live entertainment at Brenda’s unique tribute.

Gillian made a promise to her Mum that she would come back to the hospice, and Brenda took solace in this knowing the support her daughter and family had and would continue to receive there.  Gillian finishes by saying “You hear the staff at the hospice talk about the ‘hospice family’ and I honestly feel like I’m a part of this, I made so many special memories there with both mum and the staff and felt at ease with everyone and don’t think I could ever thank them enough.  I hope that by sharing my story, this will help people to have a better understanding of what the hospice does and how they do it, so that people don’t feel scared if they or a family member should ever need to”.